We are open for business as-usual. Please call or stop by the shop - our staff are happy to serve you. 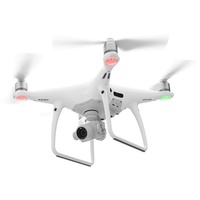 When you buy DJI Phantom 4 Pro V2.0 from Camzilla - the drone experts - you can rest assured that you're ordering from the industry experts with in-depth product knowledge and that you'll receive an unparallelled level of customer service. We're not just after a quick sale - we're looking to establish long-term relationships with our clients. All of our products are backed by the Manufacturers' Australian Warranty, and we offer free set-up and activation of your drone (if desired) and free technical support for the life of your product.

Without doubt, the Phantom 4 Pro is the best bang for your buck of all DJI drones!

DJI’s Phantom quadcopter range has always included quality cameras that get the job done. DJI’s latest release, the DJI Phantom 4 Pro completely eclipses this. The Phantom 4 Pro boasts a professional-grade camera with capabilities significantly greater than any of its predecessors.

And to record as much hi-res data as possible in each frame, the Phantom 4 Pro increases the 60Mbps bitrate of the Phantom 4 to a significant 100Mbps.

Many drone cameras also struggle with the ‘rolling shutter’ effect, which can give a jello-like shake to footage, especially when filming quick pans or chasing fast-moving subjects. The mechanical shutter of the Phantom 4 Pro helps eliminate this.

The new ability to adjust the lens aperture gives filmmakers greater control over depth of field in their images. The electronic shutter has also been improved with a max shutter speed of 1/8000-second.

The 20MP camera can now shoot 14 photos per second in burst mode and capture slow motion video at 60 frames per second in 4K resolution, and 120FPS at 1080P.

The Phantom 4 Pro camera has an aerial-optimized f/2.8 wide-angle lens with a 24 mm equivalent focal length. It features eight elements that fit into a smaller, more compact frame. Images are consistently detailed with low distortion, ensuring photos and videos are sharp and vivid.