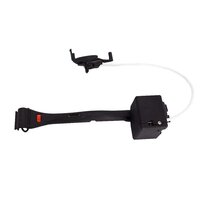 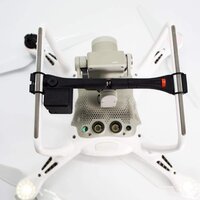 Fits all Phantom 3s & 4s Designed not to interfere with your drones VPS sensors. All remain ON, unobstructed and active, no need to move it to the back legs to clear the sensors. Mounts in seconds to your drone with no tools required, no removal of the LEDs lens, Clear from the drone camera including the large P4Pro & Adv camera. Over 10kg release ability - A Phantom can lift 1.4kg Max, 800g Max recommended bait, more possible but not recommended. Selectable electronic or mechanical release - for the guys that fly amongst the gulls, adding protection against reel jams with emergency bail. Is fully autonomous and self-sufficient with its own rechargeable battery, charged from an internal charger powered by USB charge lead in under 30min. A single charge can do over 100 drops, Over 2-week stand by if left on (warning this could damage the battery) No need to modify your drone in any manner nor do you need to open it, Central loading the same as all other Gannets - balancing the load on all 4 motors, this is fundamental to all drones. See WARNING section below for more details. All electronics are kept away from the light-bridge antennas and compasses that are located in all 4 the drones legs. Thus ensuring interference-free operation of your drone even at long distances, Is activated by the front LED lights of your drone which can easily be turned on and off using your C1 or C2 buttons on your drone's remote * . Alternatively, you can set your drone's camera that when you start recording that it automatically switches the lights off, stop the record and the lights are back on. Fastest one handloading of all releases, even while the drone is hovering. With no need for metal/plastic rings on the Drop-Loop. Designed for 0,3mm to 1,4 mm nylon Drop-Loops of either nylon or even metal. Instant activation from the C1 or C2 button on the drone remote, - full distance range of the drone. All 4 flight LED lights remain fully functional and visible (No LED is blocked off), Gannet X Sport can be used in Light or Dark mode (user selectable) The best Gannet to date thanks to the patent-pending electro-mechanical release mechanism. Weighing in at only 60g. Weight saved on the release is safety gained for the flight reducing drone power consumption. Because of it’s high accuracy, (±5% @ 800g setting) the release setting can be made higher than any other release, closer to the drone limit, resulting in more hookups and less missed fish throwing the bait/lure as the hook was not set on the initial strike, this when trawling lures or bait direct to fish. Same goes for reducing stress on the drone when dropping normal baits no need to set it too high, saving your drone in the long run. The Mechanical release is activated whenever the pull force on the release line, the Drop-Loop, exceeds the user setting, so if set to release at 1kg you can comfortably fly 600-700g loads all day long, the trailing line, wind on it and the bait, is typically less than 200g in most conditions, so if you manually stop the spool whilst still flying forward the drone easily exceeds the additionally needed 100g - 200g releasing the load. Instant release should the reel or line snag to above the settings threshold, same as it would if a bird was to hit the line. * excludes Phantom 3 Standard that does not have C1/2 buttons and needs activation from within the DJI Go App


WARNINGS & CONCERNS REGARDING OTHER DESIGNS

DO NOT disable VPS or Landing Protection, critical systems that protect your drone, camera & gimbal as well as personal and public safety. Other designs that require VPS to be disabled are compromised and should be avoided. For more on VPS and flying over water please see https://youtu.be/FihnvkaN83M

Some designs require yanking the line free, the drone IMU does not handle repeated sudden movements well, nor is it good for the drone legs that house the radio antennas and compasses.

Some designs force off-centre loading, to any side, especially the back in order to clear the VPS sensors, this reduces the load-carrying ability by up to 40% if central back and up to 60% if off-centre to back, this dramatically increases drone instability, as individual motors over speed while countering the imbalance resulting in loss of control. These designs that require off centre loading are compromised and should be avoided as having one or two motors overwork and failover water is fatal. These designs make several claims to try to justify loading off centre, these claims are false and designed merely to justify a poor concept. There are designs that lift “near” the centre but when they do they interfere with the VPS, these designs have options to clear the sensors but in those positions, they then lift the load totally wrong.

Several designs weigh over 100g, any unnecessary weight added to the release is unnecessary power-sapping on the drone, also reducing the max bait load by the equivalent. Every 50g saps approximately 5% more power from the battery 100% of the time the drone is airborne. So in 4 bait drops the drone has lost near 1:30min flight time just because of the heavy release. This can be the difference of making it back to shore or having the drone go for a swim.

What's in the box?