HOLIDAY HOURS: SHOWROOM CLOSED ON 27 & 28 DEC AND 1 JAN. WE'RE OPEN ALL DAYS THAT ARE NOT PUBLIC HOLIDAYS 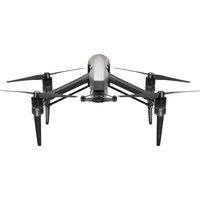 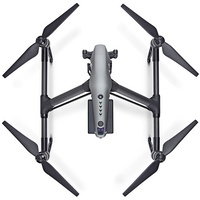 Aimed at professional filmmakers, the DJI Inspire 2 is DJI's most powerful cinematic and photographic quadcopter yet. Using the separately available  Zenmuse X7, X5S or X4S camera/gimbal, the DJI Inspire 2 boasts impressive cinema-grade images which can be recorded in high bit rates using H.264 and H.265 formats.

CinemaDNG and Apple ProRes licenses are also available from DJI for further high-end broadcast quality. All the recording functionality is processed by the Inspire 2’s CineCore 2.0 image processing engine.

The magnesium-aluminium-clad Inspire 2 is the first of the DJI range to enable two onboard cameras. In addition to the optional X4S/X5S/X7 camera with three-axis gimbal, it also includes a two-axis FPV camera mounted on the front of the quadcopter.

This 360-degree rotatable camera allows the pilot (or co-pilot) to navigate the Inspire 2 without being limited to the main camera's field-of-view. The system is designed for dual operators: one pilot and one cinematographer framing the action, each receiving their own live video feed.

And all the new power found in the Inspire 2 is not only in its recording functionality. Able to accelerate to 80km/h in 5 seconds and reach a top speed of 93 km/h, the Inspire 2 can follow fast-moving subjects for dynamic sport and action footage.

The flight prowess of the Inspire 2 doesn't come at the expense of battery life. With two high-capacity TB50 LiPo batteries onboard, pilots can experience up to 27 minutes of flight time with the X4S camera/gimbal.

Dual batteries mean that if a problem occurs on one battery, the other is able to continue flying long enough for a safe landing.

Advanced obstacle avoidance has also made its way to the Inspire 2. Built into DJI's FlightAutonomy system, objects in front of, below, and above the quadcopter can be detected and avoided automatically. The Inspire 2 can even remember flight paths in case of an emergency return-to-home without GPS enabled.

The Inspire 2 features DJI's upgraded Lightbridge technology- resulting in improved signal strength and distance. It is capable of delivering both 1080p/720p video as well as the FPV view to pilot and camera operator. Users can also switch between 2.4 GHz and 5.8 GHz control frequencies to avoid interference for greater signal stability.   Master and Slave setups are also supported. The master controller can transmit an HD video signal to the slave controller up to 90 metres away without image quality loss.

In Broadcast Mode, users can broadcast direct from the Inspire 2 using its dedicated 1080i50 and 720p60 transmission signal. Aerial live-streaming direct to TV is as simple as connecting the Inspire 2 transmitter to the satellite truck.

These new Intelligent flight modes are now included on the DJI Inspire 2:

Spotlight Pro is a powerful tracking mode that allows a lone-pilot to capture complex, dramatic images. It uses advanced, visual-tracking algorithms to lock onto a subject during flight, regardless of the direction that the Inspire 2 flies, creating shots that would once have required a dedicated camera operator. If the gimbal comes close to reaching its rotation limits, the Inspire 2 itself will rotate in the same direction without affecting flight control or the shot being captured to free up gimbal movement. Spotlight Pro is available in all Intelligent Flight Modes including ActiveTrack, TapFly, Waypoint and Point of Interest.

The 2-axis onboard FPV camera separates the flight view from the main camera view, effectively giving the Inspire 2 a dedicated "tap-to-fly" camera. Tap a point onscreen in the FPV view to set a flight route and the Inspire 2 will automatically fly along that route, leaving the pilot to focus on gimbal movement.

The ActiveTrack Mode allows the Inspire 2 to recognize a range of objects, from people to bikes to cars to boats. Tracking profiles that can be adjusted based on the subject being tracked means greater tracking precision.

Forward and downward vision systems allow the Inspire 2 to create a real-time map of its flight route as it flies. If the video transmission system signal is lost and Smart Return Home is enabled, it is able to fly home along its original route and change to a straight line when it regains a signal. As it returns, it will use the primary camera to identify obstacles as far as 200m in front, allowing it to plan a safe route home. It is also able to reconnect quickly after losing connection.

Other than a camera/gimbal, everything you need to set up your Inspire 2 is included in the box:

All you'll need separately is the camera/gimbal and lens(es) of your choice! Choose from the Zenmuse X4S, X5S (with 15mm lens), X5S (excluding lens) or the recently-released X7S.