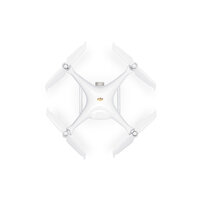 When you buy the DJI Phantom 4 Pro V2.0 from Camzilla - the drone experts - you can rest assured that you're ordering from the industry experts with in-depth product knowledge and that you'll receive an unparallelled level of customer service. We're not just after a quick sale - we're looking to establish long-term relationships with our clients. All of our products are backed by the Manufacturers' Australian Warranty, and we offer free set-up and activation of your drone (if desired) and free technical support for the life of your product.

DJI has taken its most popular drone - The Phantom 4 Pro - and has refined and improved it. The result is the Phantom 4 Pro V2.0. This new drone introduces the following features:

​​The Phantom 4 Pro V2.0 is equipped with the same 1-inch 20 - Megapixel sensor that's found in the Phantom 4 Pro and Phantom 4 Advanced, so it's capable of shooting 4K/60fps video and Burst Mode stills at 14 fps. Its Flight Autonomy system includes dual rear vision sensors and infrared systems, for a total of five directions of obstacle sensing and four directions of obstacle avoidance.

DJI’s Phantom quadcopter range has always included quality cameras that get the job done. Like the Phantom 4 Pro, the Phantom 4 Pro V2.0 completely eclipses this, boasting a professional-grade camera with capabilities significantly greater than any of its predecessors.

And to record as much hi-res data as possible in each frame, the Phantom 4 Pro V2.0 increases the 60Mbps bitrate of the Phantom 4 to a significant 100Mbps.

The new ability to adjust the lens aperture gives filmmakers greater control over depth of field in their images. The mechanical shutter has also been improved with a max shutter speed of 1/2000 of a second - eliminating the rolling shutter distortion that may occur while shooting fast-moving subjects or during high-speed flight.

The Phantom 4 Pro V2.0 camera has an aerial-optimized f/2.8 wide-angle lens with a 24 mm equivalent focal length. It features eight elements that fit into a smaller, more compact frame. Images are consistently detailed with low distortion, ensuring photos and videos are sharp and vivid.